Kelly Kotchish of York, PA. has lost over 70 pounds so far, but more importantly she has acheived substantial results when comparing her body composition totals. She has lost body fat while also gaining lean body mass (muscle and bone density) which has enhanced her metabolism allowing for continued fat loss. Her new found love for exercise has inspired her to compete in several 5k and 10k races and is training for a half marathon in 2014. Her family has also developed a new healthy lifestyle, her husband also had a significant weight loss which impacted their planned vacation to DIsney and their ability to enjoy time spent with their children. Her continued success has been a inspiration to myself and others, Great Job Kelly! 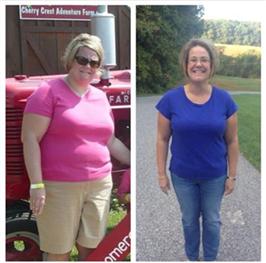